“The Cops Didn’t Read Me My Rights…” 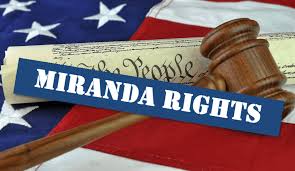 One of the most common things people tell me day in and day out is that the police didn’t read them their Miranda rights. They weren’t Mirandized. What a shame! We all know from thirty years of cop shows on television that reading a suspect his rights is as basic as handcuffing them behind their back. Boy, the police really messed up. The case surely must get dismissed, right? Wrong, usually.

Before, I get into a legal analysis of Miranda and when it applies, the first thing I ask a person is “what did you tell the police?” or what did they ask you? The typical response is “nothing.” They either didn’t say anything or weren’t asked anything. The bottom line is that Miranda protects a defendant at trial from the State using things the defendant said after they were arrested if not properly Mirandized. If nothing was asked after being arrested or nothing damaging was said, there is nothing to suppress, nothing to keep out. Essentially, no harm, no foul. Miranda is only going to help keep your damaging statements and admissions from being used against you if you were not properly Mirandized after being arrested. END_OF_DOCUMENT_TOKEN_TO_BE_REPLACED

Criminology 101: The Legality of Bath Salts, “I Thought They Legally Sold Them?”

There has been increased awareness of the use of so called “bath salts” as a legal alternative to other drugs such as cocaine or methamphetamine. Aside from the dangerous health consequences, users should be aware that ingesting bath salts is illegal and they can be arrested or cited for such use.

The most common scenario involving bath salt use is with regard to probationers. A person on probation is subject to various terms and conditions of probation including a prohibition against the use of controlled substances. Then they see bath salts sold legally at “smoke shops,” they hear through the grapevine the effects are similar to cocaine and they buy it. Their probation officer doing a home check finds evidence of such use and confronts them. Hey, it’s legal right? They admit use and are placed in jail pending revocation and a trip to prison.

Criminology 101: The Truth About DUI

Before the latest Nevada legislative session end, the Nevada Assembly can’t help but to take another crack at DUI in their never ending quest to “prevent even one more death.” While drinking and driving can be hazardous, studies show that you are two times safer in a drinking related accident than one not involving alcohol. The most common “fact” bandied about is that 1/3 of traffic fatalities involve drinking and driving. Aside from the statistical leeway given to defining an alcohol related traffic accident, like counting each person involved as a separate accident, that still means 2/3 are caused by either stupidity or simple accidents. If drinking and driving was such a public health threat, why not prohibit bars from having parking lots. END_OF_DOCUMENT_TOKEN_TO_BE_REPLACED

Criminology 101: The Problem with Medical Marijuana

“How Can a Medical Marijuana Patient Be Arrested For DUI?”

Recently Former Nevada State Assemblyman William Horne proposed legislation that would allow medical marijuana users to drive and not necessarily be prosecuted for driving because they have some marijuana in their blood.

Currently, the amount of marijuana that gives rise to prosecution is not only slight, but also includes marijuana “metabolite,” which is essentially marijuana that has metabolized and is no longer active. Prosecuting for metabolite of controlled substances paves the way for convictions of people who were not impaired or under the influence. A person who smoked days earlier is still in violation of Nevada DUI law. A chronic, habitual or medical users are effectively prohibited from driving legally in Nevada. If you’re not high and don’t admit to having smoked, how would the police know your blood is contaminated? How about being a registered marijuana user? Once they “run” your I.D., they’ll see your marijuana user registration and will have no difficulty writing a report to justify an arrest. Once arrested , a blood draw will show marijuana or metabolite and you’ll being taking DUI classes in no time. Additionally, I often get clients charged with more serious offenses like possession of a controlled substance (NRS 453.336) for substances found during a subsequent inventory search of the arrestee’s car, clothes or possession. Now you have a felony to defend against and you hadn’t even smoked in days. How does that marijuana made easy card sound now? To avoid a misdemeanor, people are setting themselves up for DUIs and other felonies. END_OF_DOCUMENT_TOKEN_TO_BE_REPLACED